Main Navigation
FacebookTwitterGoogle+YouTubePinterest
To this day, we remain fixated on searching for sentience under the “microscope” known as ourselves – our own species. We convince ourselves that there lives a dichotomy between our observations, and the true answer of our curiosity will lie under one or the other. This false dichotomy is Anthropocentrism and Anthropomorphism.

There’s a very thin line between Anthropocentrism and Anthropomorphism, I’ve come to believe. Where the former regards Humans as being the most important sentient being on the planet, the latter still looks to Humans as being the model of which everything else should extol to and be like. In the end, whatever route you take in your view of all that is nonhuman, Homo sapiens remain the dominant model to “everything a species should be.”

Whenever we search for sentient beings, I believe it’s best that we leave out anything “Human” in our search and instead fixate on consciousness itself. “Cogito ergo sum” should be the dominant means of searching for sentience. As mentioned in Part One, since the coining of that phrase by Descartes, its very definition has changed several times – from including white women, to anyone who wasn’t white, to even several different nonhuman animal species. Meaning, humans weren’t really the “first conscious beings”, thus not necessarily a model of what “should be”.

I fear that, when automata becomes the next sentient being we discover, our fixations on either Anthropocentrism or Anthropomorphism will consequently lead us to never truly accept their sentience until they’re in every way like us – aging, suffering, biologically limited slabs of meat. Essentially, we’d become the next oppressors.

In fact, it reminds me of the famous science-fiction film Bicentennial Man. In this film an android known as Andrew is first taken up as a serving droid for a rich family. As time goes by, this family begins recognizing Andrew’s self-independence. Resulting in their teaching him all that they can, giving him a bank account, and eventually his freedom.

Several years later, Andrew falls in love with a future relative of the family he once served. During this process, Andrew comes across a bio-robotics engineer named Rupert Burns. Together, through Rupert’s engineering skills and Andrew’s substantial income from the carpentry designs he did several years back, they’re able to mimic almost everything that is to be Human and attaches it to Andrew. But the one thing that drives Andrew most of all is the woman he fell in love with. And in order to officiate their wish for marital status, Andrew must go before the court and have them recognize his sentience.

Unfortunately his attempts fail, with the judge leaving behind a very staggering comment: “Society can tolerate an immortal robot, but we will never tolerate an immortal human. It arouses too much jealousy, too much anger. I’m sorry Andrew, but this court cannot, and will not, validate your humanity.”

As a result, Andrew goes against his love for life and, with the help of his friend Rupert, takes the step of achieving mortality. Several years later, Andrew makes one last attempt, having aged considerably and on the brink of death. 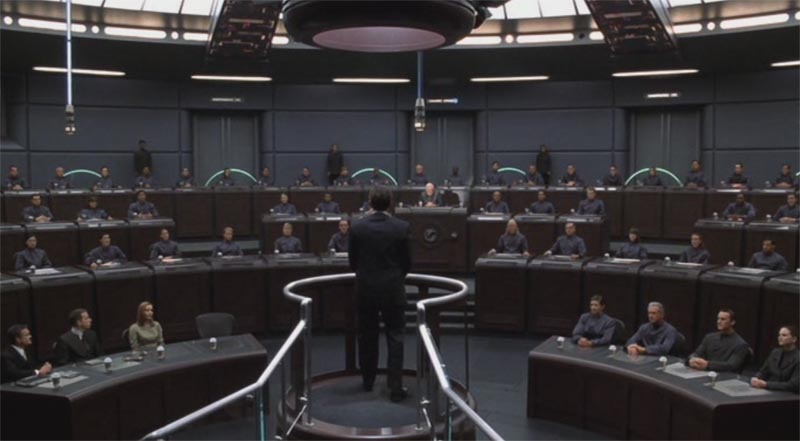 President Marjorie Bota: Andrew Martin
Andrew Martin: I’ve always tried to make sense of things. There must be some reason I am as I am. As you can see, Madame Chairman, I am no longer immortal.
President: You have arranged to die?
Andrew: In a sense I have. I am growing old, my body is deteriorating, and like all of you, will eventually cease to function. As a robot, I could have lived forever. But I tell you all today, I would rather die a man, than live for all eternity a machine.
President: Why do you want this?
Andrew: To be acknowledged for who and what I am, no more, no less. Not for acclaim, not for approval, but the simple truth of that recognition. This has been the elemental drive of my existence, and it must be achieved, if I am to live or die with dignity.

The court informs Andrew that they’ll need some time to consider everything said before reaching a conclusion. Knowing this, Andrew waits despite his life slipping away closer than ever. While on his death bed, next to the love of his life, the court reaches a decision: Andrew is officially recognized as Human. But before Andrew is to hear those words, he dies.

This is a very sad ending, in my opinion. To see Andrew thrive due to the people around him recognizing his sentience and love of life, only to then be shot down by a biased court until he becomes every bit of Human, including our species’ mortality. It’s also worrisome over whether or not a similar scenario will occur in our near future when a robot seeks to prove to the court his/her sentience by passing the Turing Test. Even by passing the test, will the court be open minded enough to accept the results? Or will the robot be forced to take on a correlating path as that of Andrew Martin’s? As Andrew would say quite often throughout the film, “This will not do.”

The court informs Andrew that they’ll need some time to consider everything said before reaching a conclusion. Knowing this, Andrew waits despite his life slipping away closer than ever. While on his death bed, next to the love of his life, the court reaches a decision: Andrew is officially recognized as Human. But before Andrew is to hear those words, he dies.
March 20, 2014By B.J. Murphy

B.J. Murphy is a writer for the Institute for Ethics and Emerging Technologies (IEET). He is a futurist, philosopher, activist, author and poet. B.J. is an Advisory Board Member for the NGO nonprofit Lifeboat Foundation.

An Exosuit for the Augmented Human
February 13, 2014